I have been “downsizing” my collection of old photographs from various sources and selected a number that I really must keep and hear are five of them. 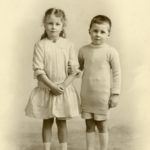 A delightful studio photograph taken in the Handsworth Studio of H Whitlock around 1900. In the early days of photography simple cameras for people to use were simply not viable, so the professional photographer set up a studio and the family went there for photographs, if they could afford it. Whitlock was a notable Birmingham photographer and one of his studios was in Handsworth. Initially exposure times were quite long so smiling was ruled out as it is difficult to keep a straight smiling face. Also small tables were provided for anyone standing to lean on to stop any movement. Here the exposure time must have shortened quite a bit as the children have nothing to support them, but it looks as though smiling was not encouraged although it was not far away. 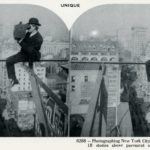 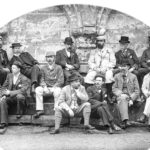 A reproduction from a lantern slide by Marion Silverston in about 1900 that I have entitled “Group Outing”. Almost all the characters have a badge in the left lapel of their coat but I cannot read it. So who they are has not been determined but it has been suggested that the place may be Wenlock Abbey. I think the sharpness of the image and the delicacy of the contrast is quite remarkable. Marion Silverston was a significant Birmingham photographer who set up a studio in Edgbaston and concentrated on photographing children. 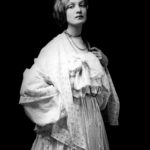 “Lady Disdain”, so named by Marion Silverston, again an image from a lantern slide. I think that this must have caused quite a stir, with it’s black background and intriguing image.. 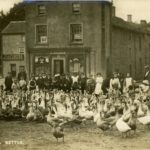 The Goose Fair at Strettle. A small print, date unknown. This is intriguing for me because in the bottom right hand corner there is a small sign which states that “ This is a real photo”!

Lantern slides are a very good source for the depiction of angels. This is not surprising given that Church halls were frequently used for lantern shows.

So here is a selection, mainly rather beautiful, but in one case gruesome and beautiful at the same time.

Two of our slides, “Angels are near” and “the Spirits’ Flight” were used by Margaret Barker in her book “An extraordinary gathering of angels”.

The first group are cartes-de-visites of the Royal family taken by Mayall including some dated 1st March 1861. The second group shows the Prince of Wales and the Princess of Denmark, to become Princess Alexandra, and her family. The next group includes the official photograph released for the Diamond Jubilee. The last two photographs are from stereocards of the funeral procession of the Queen and show the German Emperor, the Kaiser, walking on the right of King Edward, and the veiled ladies of the court walking behind.
View 4 albums and 0 photos (25)
Home › Paris Gallery › Paris

Photographs of London by WLFW

A miscellaneous collection picked to show some of the contrasts of the day. The ‘Promenade’ might well be the Sunday afternoon parade at Scarborough.
Slideshow
View 12 photos