Employees of Tubes Ltd, Aston in 1901 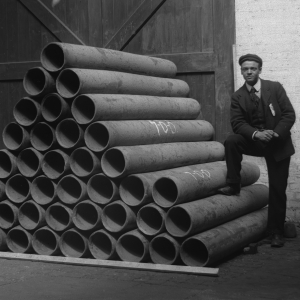 Recently a box of glass negatives was found containing six photographs taken at Tubes Ltd of Aston in 1901. They had been taken by S. H. Smith of Smith, Bingley and Evans, an iron foundry nearby. Prints from the six are shown here.

No.1 shows the Stiefel Gang with, we guess, the Works Manager. The Stiefel process was a hot working method of piercing a hole through a solid steel billet. The tube resulting is shown.

No.2 is the Engineering Shop, with the men who probably installed most of the machinery and then kept it going.

No.3 The Stiefel product was drawn down to the tubes shown in this photograph of the men of the Finishing Shop, again with the Works Manager and, on the right of the back row, with callipers in his hand, probably the Inspector, who checked the dimensions of the tubes.

No.4 The Works Manager with the finished product.

No.5 The Staff. A great period photograph. No smiles were allowed because at that time exposure times were such that it was difficult to keep a smile on long enough and any movement would blur the image.

No.6 Tubes Ltd Football Team, with supporters. Note the man with his hand on the ball, and so most likely to be the captain… the Works Manager!