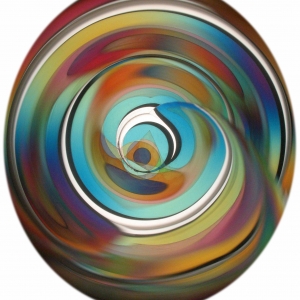 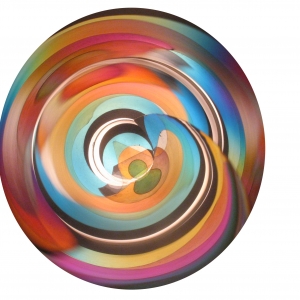 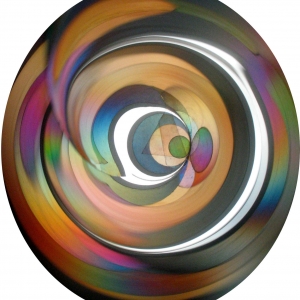 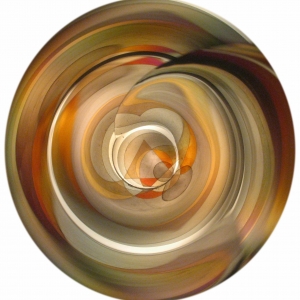 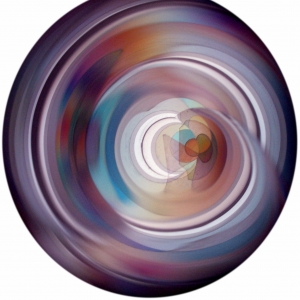 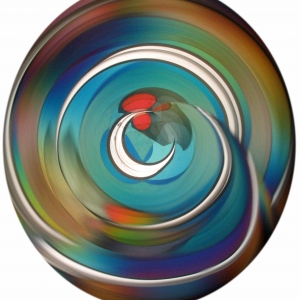 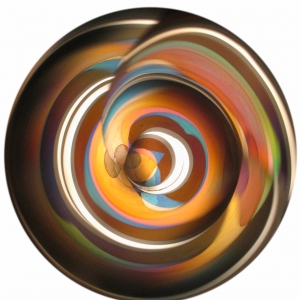 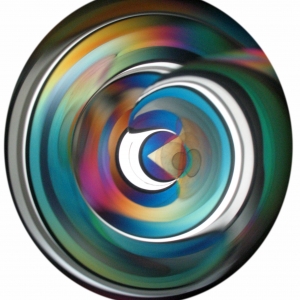 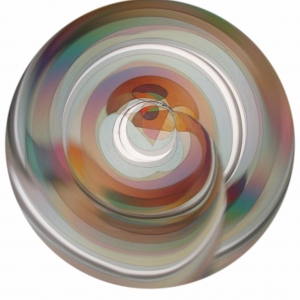 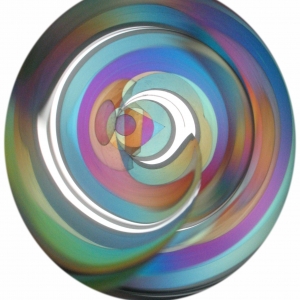 Sir George Pollock, the distinguished photographer, has a website with many different types of abstract photograph and all grouped under the heading “Photographing Light”.

One of his early types was the Vitrograph, an abstract colour photograph using coloured light shone through rough pieces of glass. I was really impressed by them, to the extent that I bought one, entitled “Nebula”, an act which seriously stretched my pocket.

I still have that Vitrograph. Having discovered that I was not particularly good at pictorial photography I had a go at something like a Vitrograph. The front door and a couple of windows on the front of our house had a few bubble glass panes, looking like a crude glass lens with the middle broken off.

I set up my camera inside the front door behind one of the bubble glass panes and then needed something colourful to photograph in the front garden. I set up a clothes horse some yards away, draped it with coloured towels and garments and photographed them through the bubble glass.  Coloured light through roughish glass, my next best thing to the Vitrograph.

There are five images shown in GALLERY A.  No. 5 has been given the title “Hurricane”.  Not long after they were taken we returned from a holiday to find that a curtain behind a bubble glass pane had a small black- edged elongated hole  burned into it from the focussing effect of the bubble glass pane. We soon parted with them!

A developing interest in the history of photography and the collection of lantern slides, mainly photographic, put paid to further experimentation. What I did retain was an interest in optical toys, including Kaleidoscopes and eventually this led me to a completely new type of Kaleidoscope.

In general the Kaleidoscope uses mirrors to reflect light and give multiple images of objects inside it. As long ago as 1978 Judith Karelitz invented a quite different Kaleidoscope, the Karascope, one commercial version of which became the Spirascope. In this tubular device the light, as it enters the tube through a colourless plastic looking cover is polarised and then refracts through other clear materials and reflects from a spiral mirror. There are no coloured materials used yet on viewing through the tube you see a circular asymmetric image in a gorgeous range of colours. It really is remarkable. In GALLERY B I   have chosen to reproduce ten photographs as oval images.

Alas, through misfortune the polarising end of the Spirascope was damaged and became detached. However I have continued to use the shell and of all things decided to use it to photograph flowers in the garden. Nine of them can be seen at GALLERY C.

Finally, I have started using a new Kaleidoscope, again one with a difference. Instead of a holder of objects at the end, there is a rotatable lens, so this gives multiple images of whatever it is pointed at. In keeping with the spirit of Sir George Pollock in photographing light, I produced a spectrum of light on a wall with a projector and a glass prism, and photographed it through the damaged Spirascope, both ways, and through the new Kaleidoscope.

In GALLERY D there are two images from the Spirascope as was, No1 and No 2, No 1 being one of my favourites, and three from the new Kaleidoscope.

Have a go at photographing light!