Tucked away in a box of old books, it looked just like a modern notebook, size 16cm x 10 cm, a black cover, thin, but then I realised it was a book. I was amazed to read the title page, Fig 1. A poem about Birmingham? Yes, in two parts, in rhyming couplets, a total of 100 pages, dated 1851, and written by Harry Howells Horton, dedicated to William Scholefield M.P., Fig2. There is a note in the preface which states “The Author had prepared a brief historical sketch of the town, which he intended to have introduced here, but he finds there will not be room-at least in this edition.” A search for this book reveals that there was a second edition, with an appendix, dated 1853. Copies of this edition appear to be readily available, but not the first, 1851, edition. It is beginning to look as though this is a first edition and that it might be relatively rare! 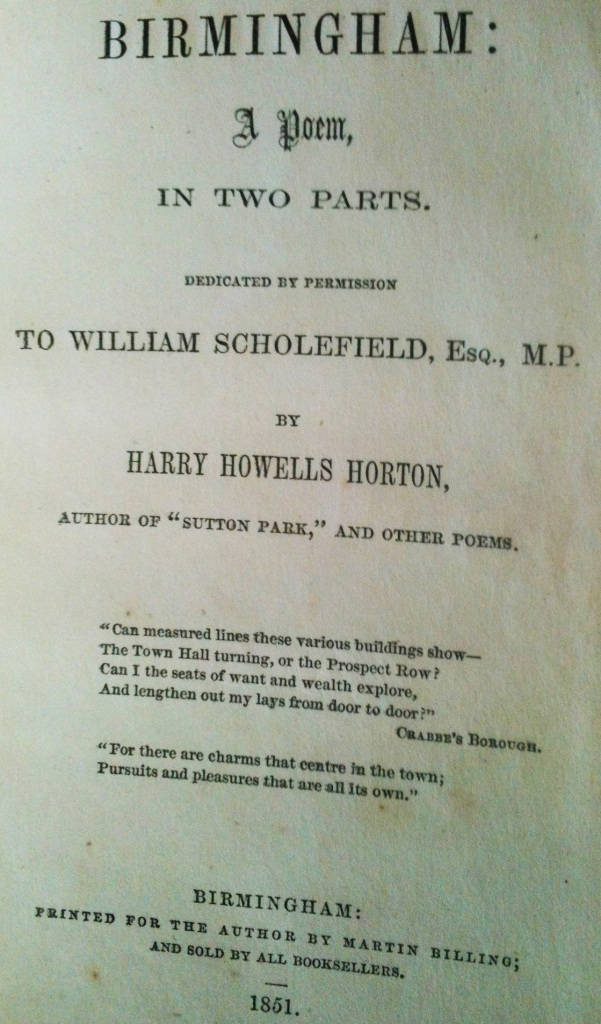 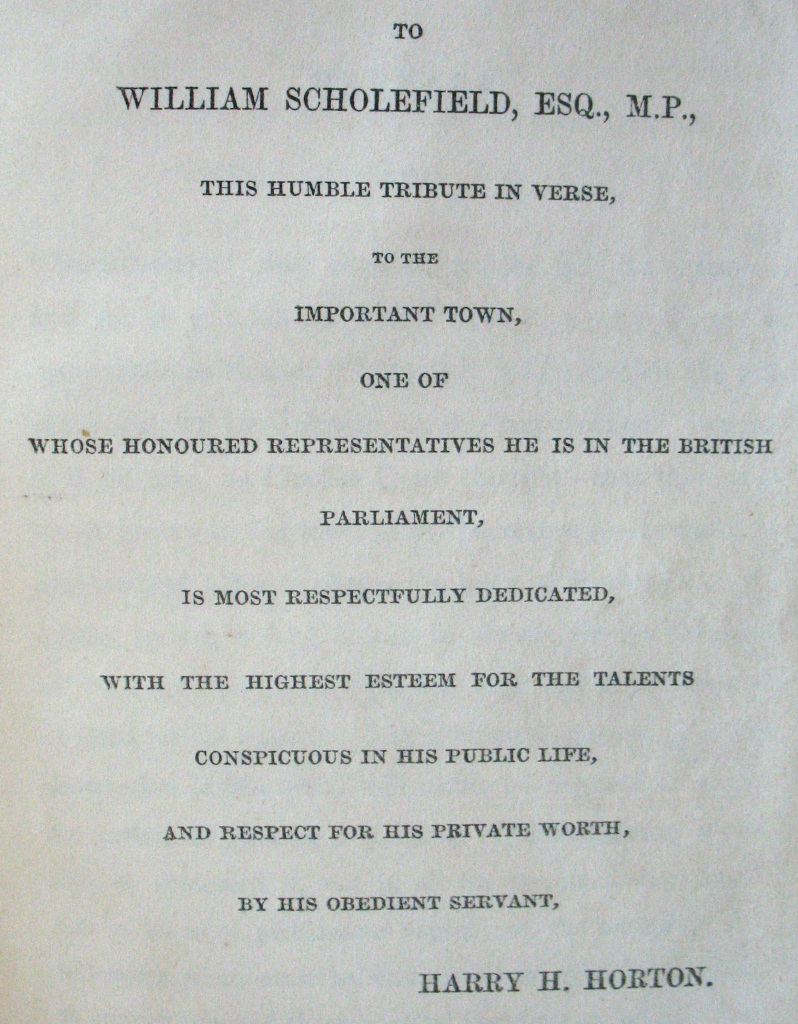 Part 1 deals mainly with the town and its products and Part 11 more with the local worthies, whose names are usually given in footnotes. In Part 1, and as the year is 1851, the year of the Great Exhibition, the author points out that:-

i.e. at Chances Glass Works and Fox and Henderson’s London Works at Smethwick. Other products mentioned, in footnotes, are “The Florentine button especially, I am informed, has been the most successful product of recent times” and “The Climax Detector Lock…is considered a most perfect invention”. Of buildings “St Philip’s Church, though old, still bears the crown”, but then

“And not alone St Philip’s but St Paul’s,
With form of beauty for attention calls
Chaste in its structure, happy in its site
It long has been our pride and our delight”.

Under the parochial system of governance the established church had been able to impose a levy on households in the town to cover mainly the costs for the overseeing of the poor but also the cost of upkeep of the churches, and known as the church rates. Responsibility for the poor was moved elsewhere but the rates continued. This was not popular and there was trouble, as described by the Poet.

“Twas here religion’s battle first was waged;
Here that the people, by the fraud enraged,
Against their pious foes at last engaged.
For ever honour’d be the names of those
Who, strong in truth, against the Church arose
And, with unflinching courage, dar’d withstand
Her ever grasping and rapacious hand
Despite her canon laws, and eke the state,
They called the plunder which she called the rate.
Muntz, Parc, and Trow, the foremost in the fight,
Suffered, but conquered, in the cause of right.
Since then the good old town has been exempt
From pious frauds, the objects of contempt.”

George Muntz was a highly successful metal-roller, who invented a type of brass called Muntz metal. He was extremely eccentric and very aggressive and in 1837 he led a minor riot in a vestry meeting in St Martin’s church in protest against church rates. He was convicted on a charge of affray but this was later quashed. Not long after he entered politics and became an MP. This account of the affair also says a lot about the Poet.

Of a number of people referred to in the poem there is Joseph Moore who ran the Triennial Music Festivals in Birmingham from 1802 to 1847 and was a Churchwarden at St Paul’s in 1800, of whom is written…

“And there was one, to whom is justly due
Much of our fame for taste and music too,
Whose quiet, plain, and unobtrusive life,
Alike removed from bitterness and strife,
Passed on like some unbroken tranquil stream…”

My final quotation is about the Revd Rann Kennedy, who is said to be “…an eminent classical scholar and a poet of no mean pretensions”. From 1797 to 1817 he was curate of St Paul’s and from then until 1848 he was the incumbent, his congregation having purchased the presentation for him. He also became second master at the Free Grammar School, King Edwards, in 1807, where our poet, H. H. Horton, was a pupil.

“I loved my reverend tutor’s easy sway,
save when his anger roused us to obey—
Then with a rod of iron he would rule,
The transient despot of the affrighted school…”

“Twas his high mission to instruct mankind
From the rich treasures of his fertile mind;
To teach with dignity those truths divine,
Which in his past career reflected shine,
And not alone the pulpit did he grace,
His worth was owned alike in every place.”